During the distillation season, the olfactory tastings of the new eaux-de-vie take place.

After the vinification comes, between November and March 31 of the following year, the time for distillation.

With it, tastings of a very particular type take place.

Several times a week, meetings between one or two professional tasters and voluntary distillers are organized in the town halls of the vineyard.

The ceremonial is always the same.
In the middle of the morning, on the day and place, on a not too large table the organizers line up empty tasting glasses and a large bottle filled with distilled water enthroned in the middle of the table.

Then, the distillers arrive and place on the table small vials filled with samples of their brandy just distilled.
Each vial is numbered and placed in front of an empty glass. After a while a hundred vials can be lined up.

In an almost religious silence, the two professional tasters then begin their tour de table.
They pour a little of each sample, a distillate which has an alcohol content of around 71 °, into the corresponding numbered glass and carry out a first olfactory tasting, called full degree.
Then, each brandy is extended, that is to say reduced to distilled water poured from the large flask.

At the end of this first tasting of the hundred or so samples, a second olfactory tasting begins. With an extended eau-de-vie, the aromatic characters become more intense.

(Not so) tasty discussions

For each sample, a comment aloud is made on the quality of the brandy and, sometimes, on the process of distillation, even vinification or even harvest corresponding to the sample …

“On the 7th [understand sample n ° 7], beautiful floral pick-ups and dry vine shoots, without heaviness with a discreet ethyl hint. Pleasant, good ..”
“The 18th, fruity aromas with banana. Who is it? … You? You have a lot of lees to distill, it’s rather rare this year!”

Sometimes the verdict and the ensuing exchange are much less flattering:
“The 65, lack of finesse, too many herbaceous upsurges, who is it? A lot of rot in the vines before the harvest?”
“No… “
“So a problem during the harvest?”
“Well … the wine press broke down …”
“A lot of trailers are still waiting? Next year, do a preventive check of the press !!!!”

“72, is that you too? Your sample is ethereal. How much did you cut off the heads?”
“5 liters …”
“It’s not enough. We smell too much ethyl acetate. Cut to 6 or even 7 liters and your good toast will be much better.”

All the samples are tasted and analyzed …

As soon as the verdict is reached, each glass passes from hand to hand among the participants who, in silence, estimate the quality or measure the defect of the eaux-de-vie presented.

At the end of the tasting, relieved or a little more worried, each distiller takes his samples again and, before leaving, comments on the weather, its impact on the wines and the distillation …

Great moment that these professional tastings. In two olfactory tastings of a sample, before and after reduction, a professional can retrace the process of the winegrower over the past year, explain the imperfections of the brandy presented.
Where the average person sees a neutral eau-de-vie, without odorous intensity and too alcoholic on the nose, the professional sees the promise of a great cognac …

Seeing them together, we can measure the know-how essential to adapt to the whims of Mother Nature, the vineyard, the weather, and their skill in piloting a distillation that tends towards excellence.

We also better understand the patience of distillers and their relationship to time, the weather and the time that passes to offer us great cognac.

For us, see you when the Grande Champagne eaux-de-vie distilled this year will reach maturity in 30 or 40 years …

All my thanks to G. Clot, P. Vinet and G. Martonnaud for welcoming me each year to their tastings. 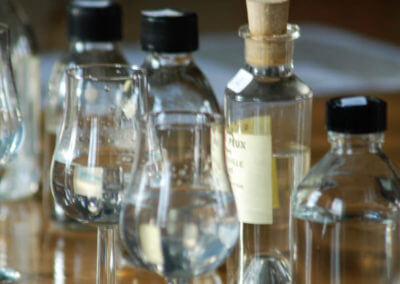 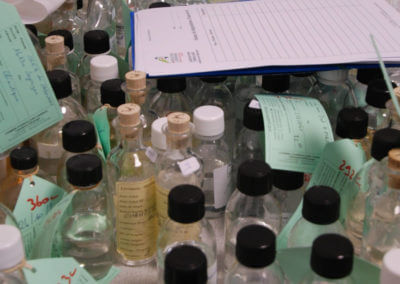 A unique experience for a cognac lover, attending a professional tasting of new cognac eaux-de-vie during the distillation season.