During the distillation season, the olfactory tastings of the new eaux-de-vie take place.

After the vinification comes, between November and March 31 of the following year, the time for distillation.

With it, tastings of a very particular type take place.

Passed the porch we enter the courtyard, closed by a beautiful Charentaise, a Napoleon III style residence with two wings, one built before the phyloxera crisis and the other after.

In a corner of the courtyard hides a small door blackened by the torula, the local mushroom. This gives you access to the estate’s distillery.
There, part of the estate’s wine production is distilled to be then delivered to large trading houses. Another part is kept for the production of cognacs and pineaux marketed directly by the estate under its own brand.

The distillery is made up of two stills.
The particularity of this distillery is to have a single wine warmer placed between the two pots of the stills. The refrigeration pipes are located along the opposite wall.
We can thus pass between the pot and the pipe of each still.

The thermometer located at the top of the boiler is used to control the temperature in the pot. The contents of the cucurbite (the pot) must evaporate slowly, the aromas are naturally selected in the onion or olive-shaped capital above the pot before being carried by the vapors in the swan neck then into the cooler coil.
The wines and the scrambles must not boil too much, otherwise the entire contents of the pot would go directly to the cooling pipe causing the loss of all the distillate or even the destruction of the boiler by implosion !!!!
From where a rigorous and regular control of the temperature by the still throughout the heating.

After 48 hours and 4 distillation cycles, the wine is transformed into brandy. The eaux-de-vie are temporarily stored near the distillery before leaving for the cellars of several trading houses as well as a part kept in the cellars of the estate.

After a few years, the estate’s eaux-de-vie will become Pineaux des Charentes and Cognacs from Grande Champagnes, considered among the best of the vineyard’s artisanal products.

And, in the cellars and the family paradise sleep some very old centuries-old blends …

But, to access it, another hidden door is to be found. Without doubt another visit to the estate. 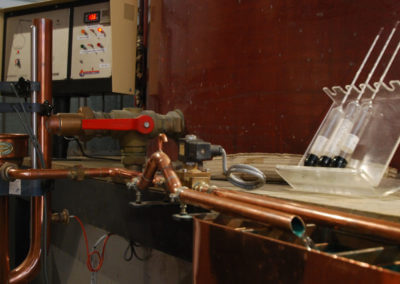