What would a good cognac be without a good barrel?

Since the time of the Gauls more than 2000 years ago, coopers have passed on the techniques of barrel making, made without any nails or glue.

What would a good cognac be without a good barrel?

This is where the art of cooperage comes into play. With more than 2000 years of history, from the time of the Gauls through the Middle Ages, coopers pass on the techniques for making barrels, made with only wood and iron, no nails or glue. Only precise and meticulous work will make it possible to make pieces of wood completely watertight and thus obtain a barrel ready to contain an exceptional cognac of the future.

The stages of making a barrel of cognac, to see during a visit to a tonnelleri

Several types of wood can be used to make a barrel, oak, chestnut, acacia or even ash.

After selecting a tree trunk between 180 and 250 years old, the main trunk is worked by removing the bark and sapwood. In the remaining part, the heart, quarters are split in the direction of the wood grain, the staves. These ultimately represent about 20% of the original tree’s wood volume.

The staves are then dried outdoors for between 2 and 4 years in order to reduce their humidity to 15% and allow the stages of making the cask to be carried out.

When the staves are sufficiently dry, the cooper will select them for the jointing step. The shape of the staves is first modified to make their ends narrower than their central part. The resulting piece of wood is then called a stave.

The setting in rose

The carcass thus formed is heated on a heater fed with oak wood offcuts from the different stages of barrel production. During this step, the wood frame is regularly wetted inside and out to make the duels more flexible and prevent them from splitting under the effect of heat. The heat and water will soften the fibers of the wood and allow a cable or jaws to gradually tighten the star-shaped part of the carcass, making the end of the staves touch each other and thus give the barrel its final shape.

As soon as the barrel is bent it is heated a second time on a brazier, this is the bousinage stage, to develop the aromatic palette of the wood.

This heating modifies the chemical bonds of the molecules of the wood and allows this one to develop its aromas which appear according to the temperature of the fire. We obtain aromas of hazelnut, butter, vanilla, even smoke. The heating time is defined with the winemaker, who thus chooses the pairings between wood and wine during the aging of the wine. The different toasts are said to be low, light, medium or intense.

These funds are made by assembling staves, fixed between them by wooden dowels.

The cooper then digs a groove in the end of the staves, called a jable, in which he embeds the bottoms using a lag screw and a hammer used to spread the staves.

Drilling of the bung and the spigot

A bung hole between 4 and 6 cm in diameter is drilled on the barrel using a twist, then enlarged with a bung hole, its edges are then cauterized using fire.

All the provisional circles are removed, the staves are scraped or sanded and the final circles in steel or galvanized iron blade put in place, a minimum of 3 per side, ie 6 circles.

The tightness of the barrel is checked by pouring in a few liters of water and then putting the barrel under pressure. Internal pressure will push water out if there is a leak.

Once checked, the barrel is sanded and cleaned, one of the bottoms, sometimes both, is laser-pyrographed to mark the name and logo of the cooperage and / or the wine estate.

There you have it, you now know almost everything about making a wine or cognac barrel.

You just have to come and discover it for yourself and “in person” on site in Charente during a cooperage visit and thus meet a cooper.

Find out more about the coopers of France : https://www.tonneliersdefrance.fr/ 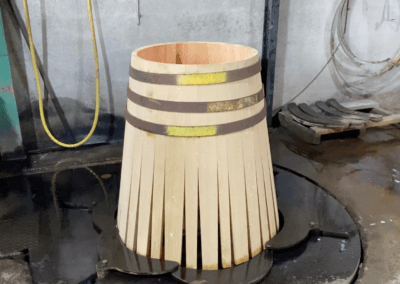 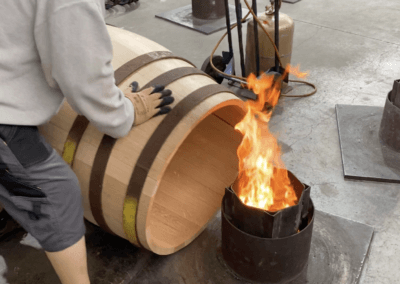 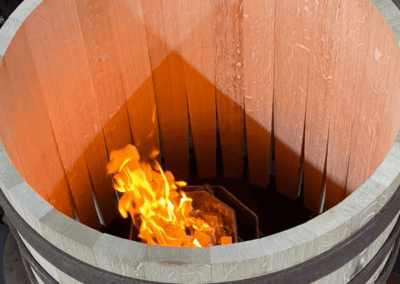 Visit a cooperage to discover the art of making a quality cask, an essential element in making a good cognac.