A long history, international from its origin

From a quality vineyard, transported by boat to the countries of northern Europe, the wines of Poitou, La Rochelle and Angoumois were, from the 13th century, the delight of the English, the Dutch and the Scandinavians.

From the 17th century, they are transformed into eau-de-vie, which will be enhanced in oak barrels to become cognac. Thus begins the adventure of a product that will become a world-renowned brandy.

In the 16th century, Dutch vessels came to Cognac and the Charentais ports for the renowned wines of the “Champagne” and “Borderies” vintages.
The vineyards of Aunis produce such quantities of wine that it becomes difficult to dispose of them the more their quality decreases, because these wines, of low alcohol content, suffer from the length of the voyages at sea.
It was around this time that Dutch merchants used it to fuel their new distilleries. They transform it into “burnt wine”, the brandwijn, which will give the word “brandy”. Thinking of recreating the initial wine, the Dutch drink this elongated beverage.

At the beginning of the 17th century, double distillation appeared in the region, allowing the product to travel in the form of unalterable brandy, which, much more concentrated than wine, was less expensive to transport. The first stills installed in Charente by the Dutch will be gradually modified; the French will master and improve the technique with the double distillation process. As a result of delays in loading boats, we notice that the brandy improves as it ages in oak barrels (from Limousin) and that it can even be consumed pure.

From the end of the 17th century, and especially from the following century, the market was organized and, to meet demand, trading businesses were created, the “Comptoirs”, in the main towns of the region, most of them of Anglo-Saxon origin. Some still exist. They collect the eaux-de-vie produced and establish regular relationships with their buyers, in Holland, England, Northern Europe, then America and the Far East.

Today, cognac is exported to more than 150 countries. Whatever the way of consuming it, it is, from the Far East to the American continent via Europe, synonymous with a product of very high quality, symbol of France and its Art of Living. A luxury product, it is sensitive to the political and economic context of the planet and is the subject, on the part of professionals, of extreme vigilance, so that, faced with growing international competition, its quality, its specificity and its authenticity are unmatched.

The Cognac Delimited Region was determined by the decree of May 1, 1909. It is located north of the Aquitaine basin, on the edge of the Atlantic Ocean. It ends in the west with the edges of the Gironde and the islands (Ré and Oléron), and in the east, in Angoulême, at the first foothills of the Massif Central. The production area includes the departments of Charente-Maritime, a large part of Charente and some communes of Deux-Sèvres and Dordogne. The landscape consists of plains and low hills with gentle reliefs. The Charente crosses the region, fed by small rivers: the Né, the Antenne, the Seugne… The temperate oceanic climate is fairly homogeneous. The annual average temperature is around 13 ° C, with fairly mild winters.

The total area of the Delimited Region exceeds one million hectares (1,095,119 ha), but the vineyard occupies only 78,179 ha. About 95% of this vineyard is used for the production of cognac.

The 6 cognac crus or growth areas

Within the Delimited Region, from the characteristics of the soils described by the geologist Henri COQUAND in 1860, production areas were defined for each of the following appellations or mentions (decree 1938):

With its 34,703 ha, Grande Champagne, covered with 13,159 ha of vines, gives birth to very fine and very light eaux-de-vie, with a predominantly floral bouquet, requiring long aging in oak barrels to achieve their full potential. maturity.

The soils of Champagnes are fairly shallow clay-limestone on soft chalky limestone from the Cretaceous period. The lime content is very high from the surface and can exceed 60%. Montmorillonite-type clays give these soils good structure, high fertility and adequate water reserve. Despite their thinness, these soils are therefore little afraid of drought, especially since the porous subsoil allows capillary rise: it behaves like an enormous sponge through which the water can slowly rise as the summer drought is increasing.

La Petite Champagne covers an area of 65,603 ha, of which 15,246 are devoted to the production of cognac. The eaux-de-vie which are produced from it present more or less the same characteristics as those of Grande Champagne, without, however, offering their extreme finesse.

It is the smallest of the 6 crus: 12,540 ha. Here the surface horizons are mostly flint clays resulting from the decarbonization of limestone. Located to the north-east of Cognac, its 3,987 ha vineyard devoted to cognac gives round, bouquety and sweet eaux-de-vie, characterized by a scent of violets. They have the reputation of acquiring their optimal quality after a shorter maturation than the eaux-de-vie from “Champagne”.

The majority of this cru is occupied by “groies”, clay-limestone soils that are superficial like champagnes, but red and very stony, of hard limestone from the Jurassic period. In a low pressure area north of Cognac, there is also the “Netherlands”, with very clayey soil (up to 60% clay). The Fins Bois surrounds the three previous vintages and covers 349,803 ha, of which 31,001 produce round, supple eaux-de-vie that age fairly quickly and whose bouquet is reminiscent of pressed grapes.

Sandy soils are found in Les Bons Bois in coastal areas, in certain valleys, and especially in the entire southern part of the vineyard. These are sands that erosion has brought from the Massif Central. The vines are quite scattered there, among other crops, meadows for breeding, forests of pines and chestnut trees. The Bons Bois form a vast belt of 372,053 ha, of which 9,308 are intended for the production of cognac.

This cru has less than 1,101 ha of vines intended for the production of white cognac wines. The predominantly sandy soil, located along the ocean or on the islands of Ré and Oléron, produces eaux-de-vie that age quickly and have a distinctive terroir taste.

Les Bois (Fins Bois, Bons Bois, Bois à Terroirs) are so called because they were cleared at the beginning of the 19th century. The central growths of Champagnes and Borderies are the most wine-growing.

A cognac ready to be consumed cannot be marketed without having undergone aging in oak barrels for at least two years, counting from April 1 of the year following the harvest. A cognac retains its age throughout its life when it was bottled.

The lists of designations that can be used according to the age of the youngest brandy entering a blend were established in 1983 as follows:

In general, each producer uses eaux-de-vie that are much older than the minimum required for their blends. They may have aged for several decades for the most prestigious cognacs. 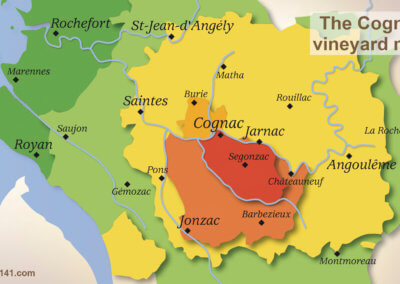 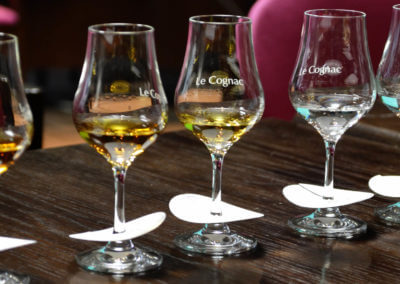 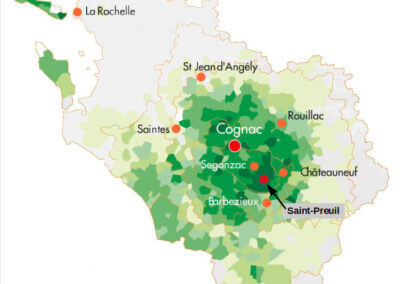 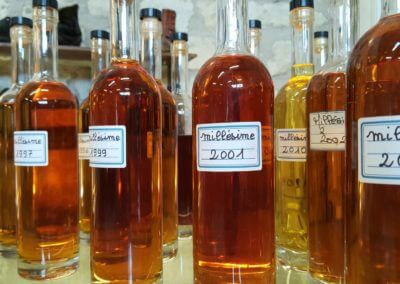 By subscribing to our newsletter you will receive news from the Cognac vineyard several times a year.

In accordance with GDPR rules, you can unsubscribe at any time.

History of the appellation of origin Cognac, a vineyard with six vintages, its champagnes, its woods, its grape varieties